So we are doing something a little different today..COCKTAILS! Mind you, these drinks would taste just as fine without alcohol so, you know, don’t be afraid to make these first thing in the morning but if you want to make them with alcohol in the morning though it’s ok too- I won’t judge you. 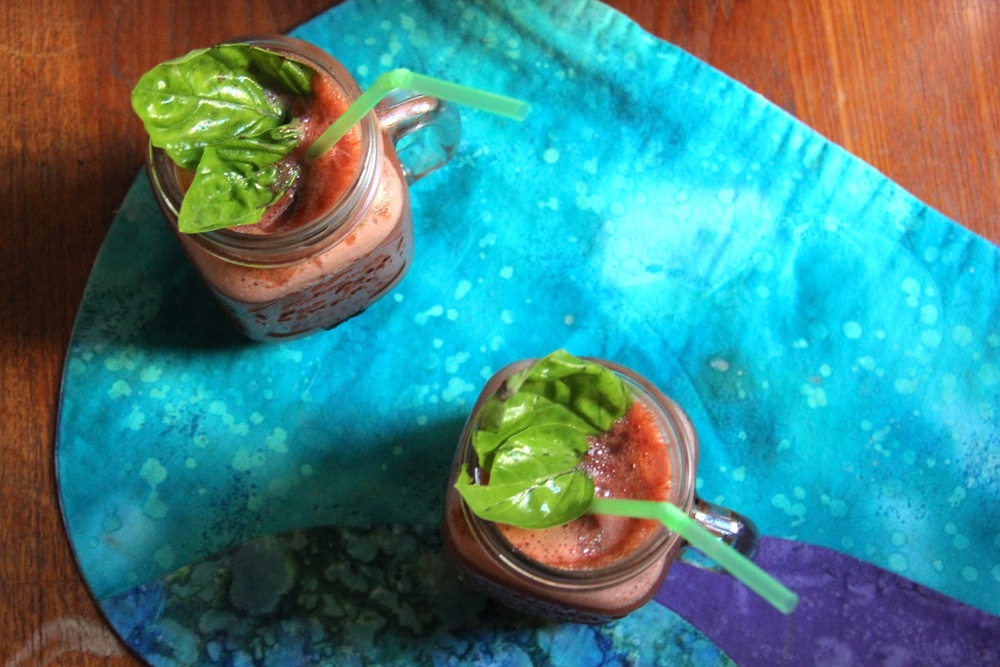 I have found the key to drinking without hangovers! Two of the ingredients are hydrators- watermelon and cucumber.  So I figure the dehydrating alcohol and the hydration of the other ingredients counteract each other so you’re all good to go (but don’t drink if you are underage and drink responsibly!).  I’m obviously no doctor or scientist, but it works for me (this goes along the same logic I have that chocolate is a vegetable because it comes from a bean- eat more veggies!).

Glass half empty or half full I don’t care as long as it has alcohol in it.  Especially when I’m relaxing with friends and it’s a frozen drink in the summer.  Frozen is a major plus. 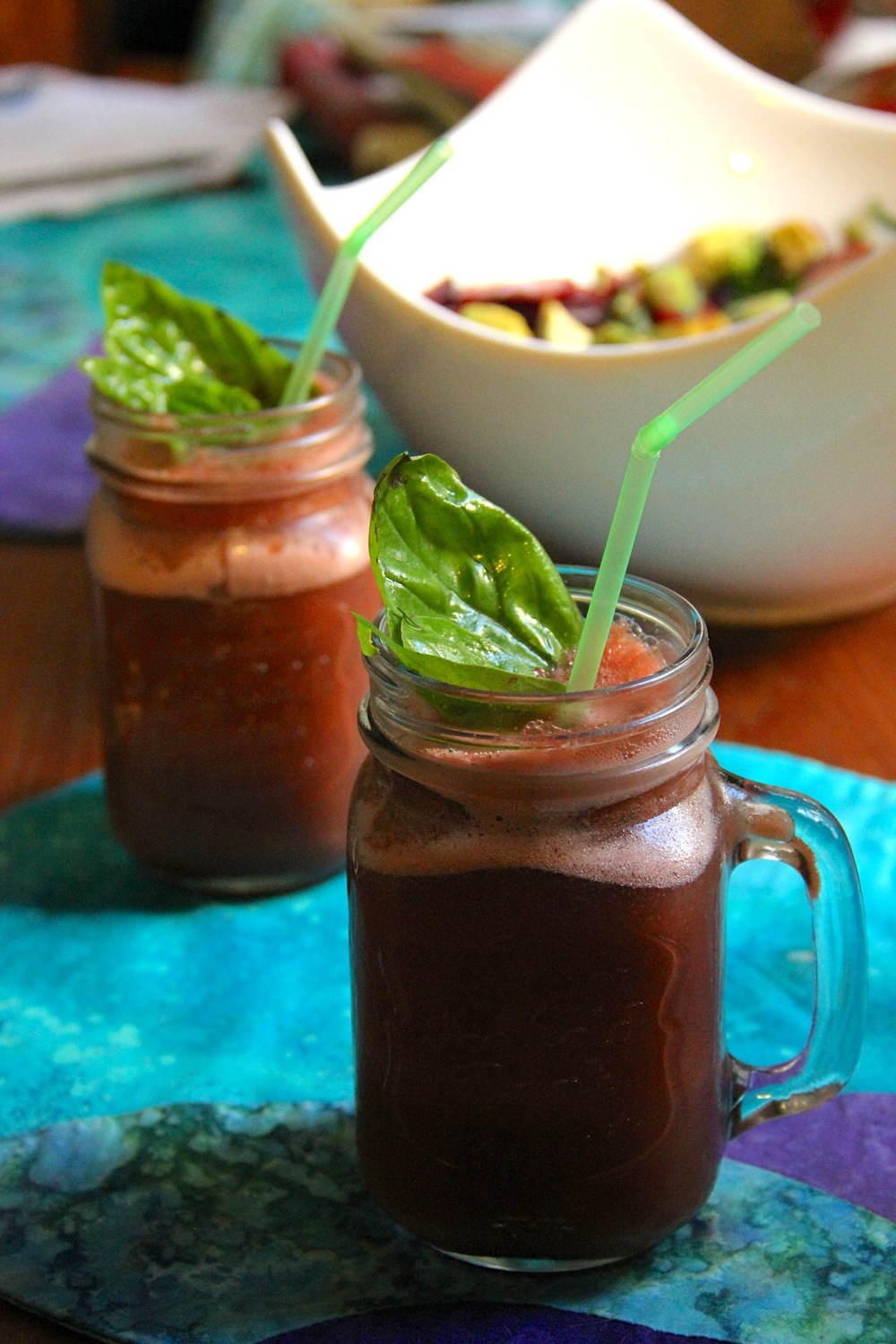 1 Handful of Basil + a few extra leaves for garnish

Toss all ingredients except champagne into blender and blend until smooth.  If you are making this without alcohol I would recommend adding 3/4 cup of either water or coconut water instead of St. Germain.

Pour into glasses and top with champagne and garnish with basil leaves.

In NYC (or at least in the hood in Brooklyn) people don’t typically have central AC and really only air condition one room with a cute little window unit.  My air conditioned room is my bedroom since sleeping is not possible when I’m drowning in my own sweat.  I have a lot of Northern European in my blood so drowning in my sweat is something that happens disturbingly often.

This means however, that at any given time in the summer, the rest of the apartment is trying to melt you away like an ice cube- and quick!  If you’ve been using the stove or oven forget about it- you might as well just die right there. 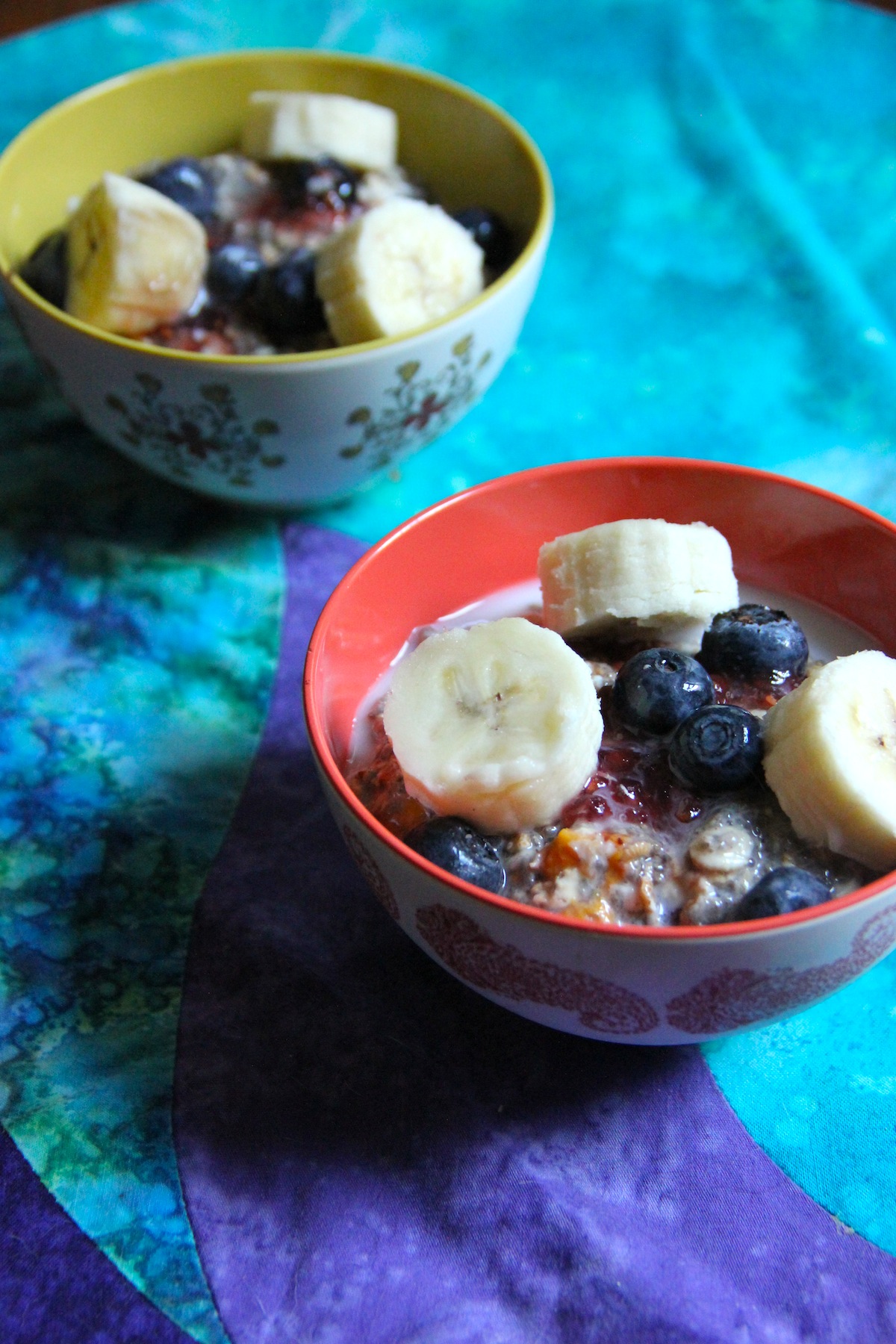 So the name of the game in the summer is cool.  Go raw- try to avoid cooking as much as possible.  Eat up those fresh fruits and veggies like there’s no tomorrow.  Since summer officially hit I haven’t spend much time in my kitchen which i regret but I just can’t afford to shower 6 times a day!  That’s where this recipe comes in- it’s not completely raw but it is nutritious, filling, and doesn’t require more than 5 minutes at a time to make.  And you have a quick breakfast ready at the go for you when you get up so sleep in more! 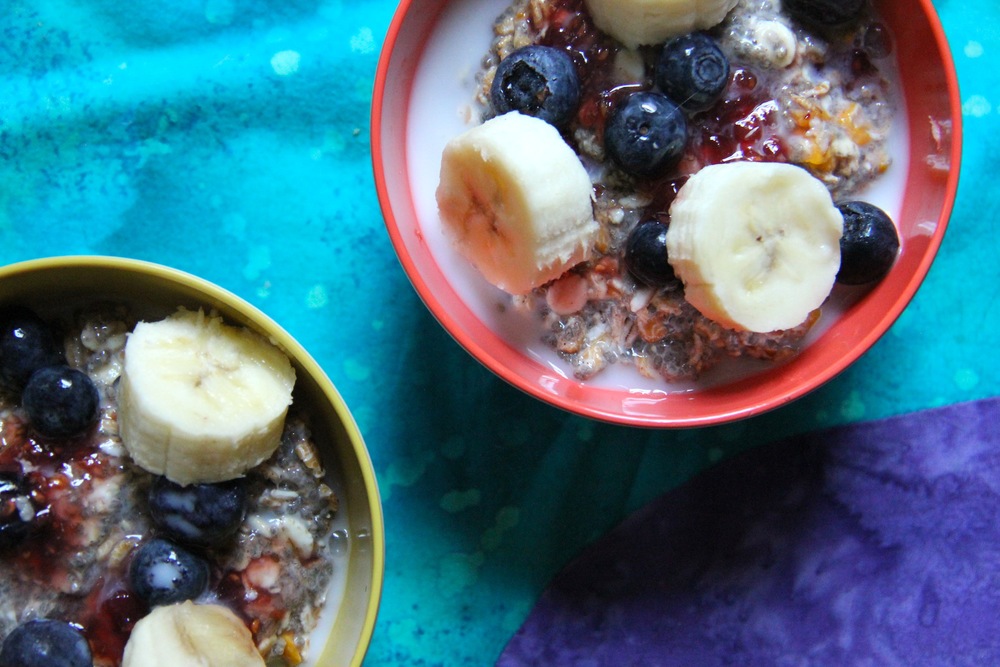 Mix dry ingredients in a bowl and add almond milk. Put into
an appropriate container (I used a mason jar), cover and stick in fridge
overnight.

When you are ready, separate into bowls and top with you
favorite toppings, adding more almond milk if desired.  I added banana slices, blueberries and
some homemade strawberry jam as my “sweetener”.

You have to admit, I just made your mornings so much easier.

Good morning y’all.  I expect it’ll be another scorcher today in the city.  So you know, all the more reason to drink lots of smoothies!  Cool, refreshing and no cooking required! Win win for all 🙂   Now, I would have taken a picture of the smoothie itself but I discovered that between the green mint and pinkish, yellow peaches, it wasn’t the most beautiful color of muddy green.  But it tastes good and that’s all that matters! 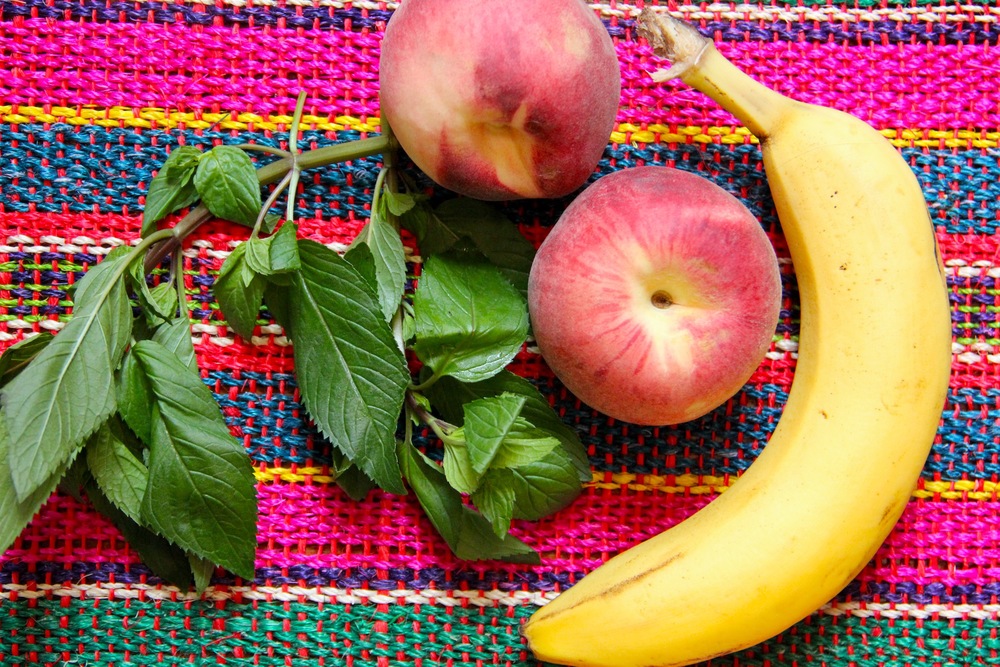 Remove pits from peaches and toss in blender with the rest of the ingredients.  Blend until smooth and serve!

Also, since I’ve noticed more people seem to be checking out my blog directly, I wanted to let you all know that I do have a Facebook page as well as an Instagram that I post at fairly regularly with pictures etc If you are interested in “liking” my facebook page, please go here.

I’m hoping to update my About page shortly with this information and other links.

So as we all know, July 4th is coming up.  And that means grills and burgers and hot dogs and beer and fireworks.  At least, I’m pretty sure it does.  See, for the past few years I’ve had to work on the Fourth of July so I’ve never been able to do anything but guess what?

This year I have the day off!

And I’m so excited because not only do I have the day off but I’ve been invited to a Vegan BBQ at Prospect Park!  This time around I won’t have to cook my veggie burgers on the grill first or find a pan in the kitchen to cook my food separately- oh no- I shall grill together with other groups of people like a normal, social human being and it shall be glorious! 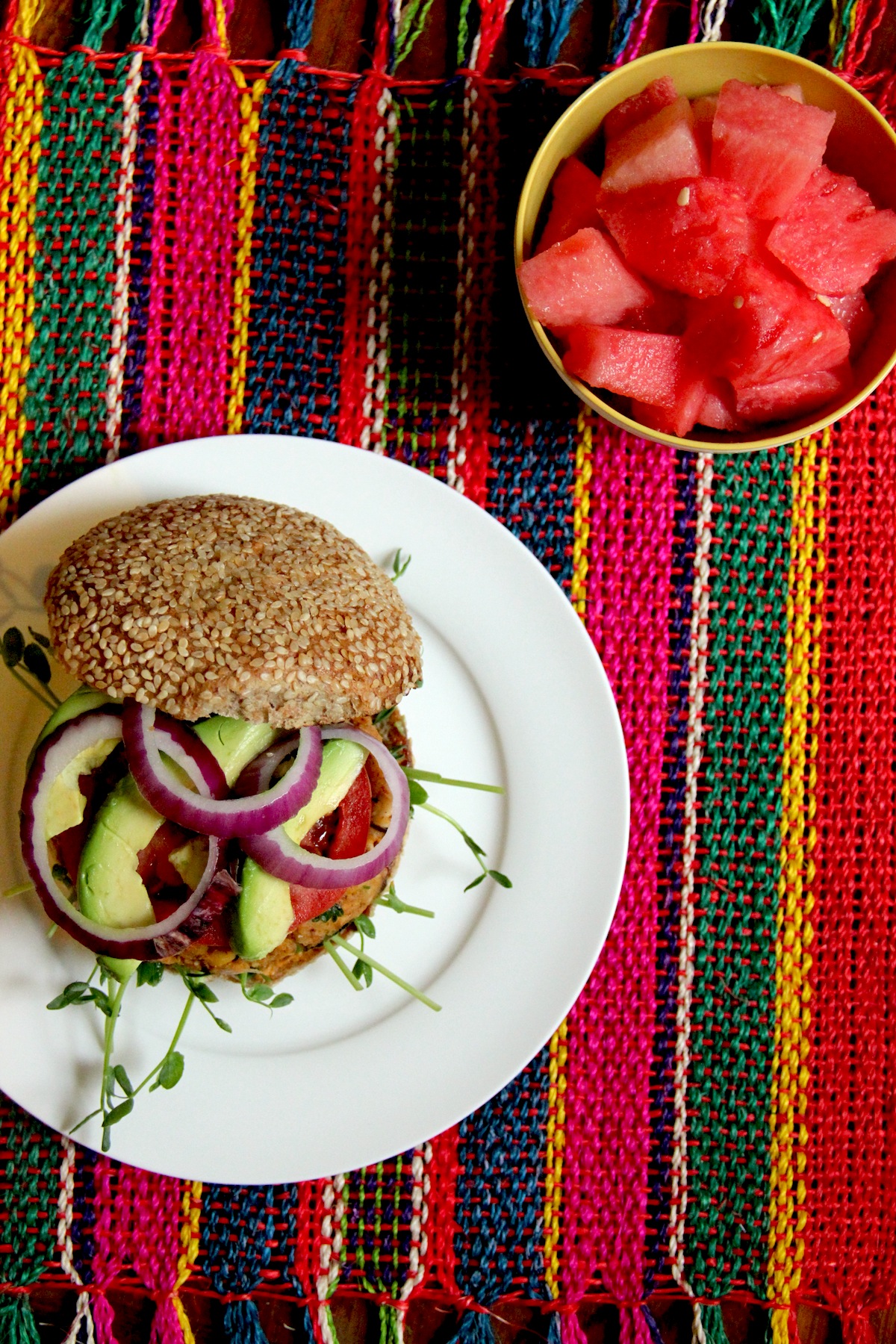 Now my only concern is whether or not it will rain.  I really hope it doesn’t because I put together a special, super delicious burger intended for mass consumption.  I had originally planned on taking pictures of this beaut in the park in the grass with the trees and sunshine but alas, nature made the final decision: it poured all day, so I had to take the pictures indoors.  But clearly you can see this stuff is made of deliciousness and that’s what really matters. 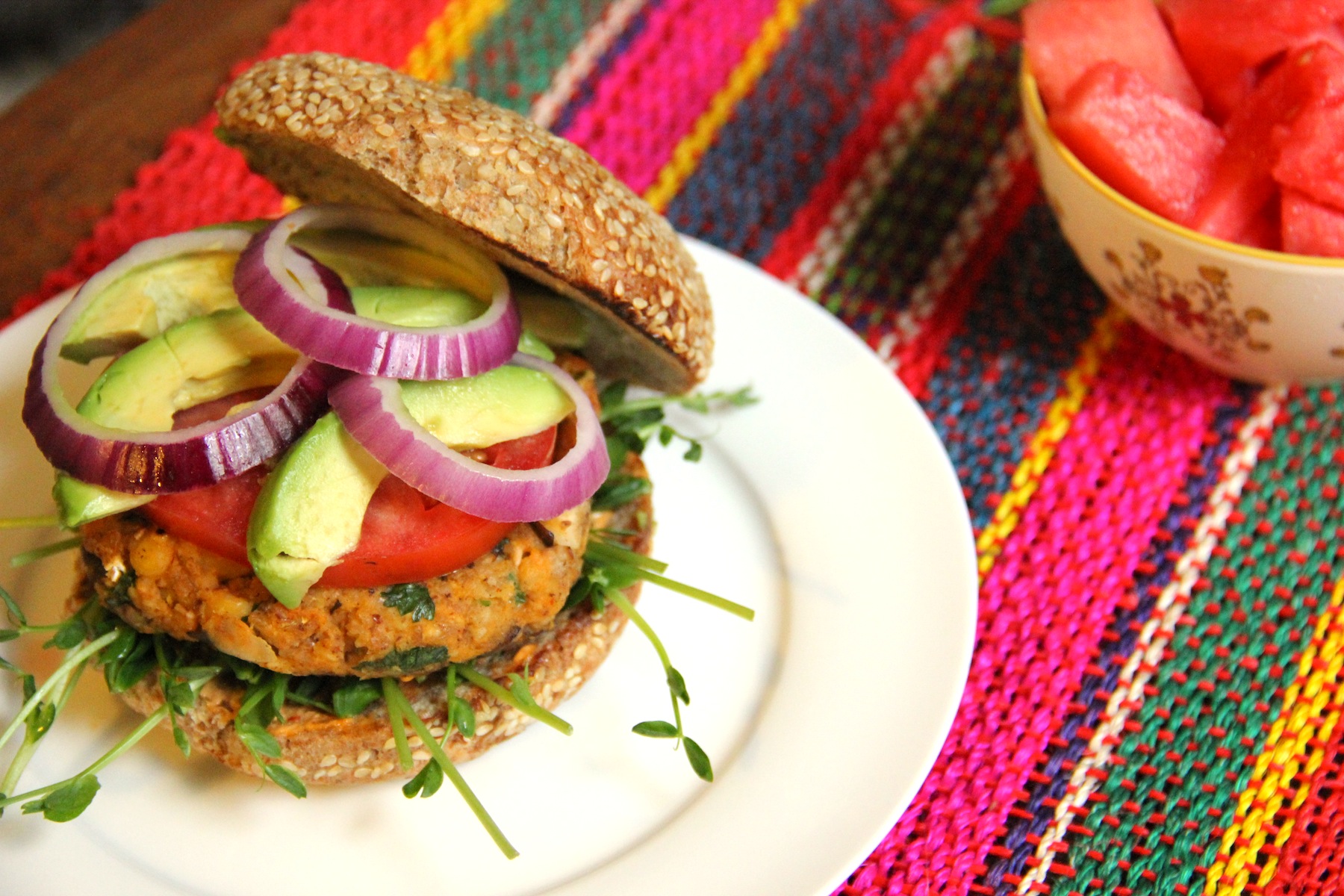 In a small bowl, combine flaxseed and water, and mix slightly.  Set aside.  Drain the chickpeas and mash in a large bowl (I used a fork because I wanted to still have large chickpea chunks but if you’d prefer, you can always blend it all smooth in a blender). Mix in sweet potato until thoroughly combined.  Heat a pan on medium/low with sesame oil and saute shiitake mushrooms a few minutes until soft.  Add to mixture along with parsley and spices.  Add rolled oats to a blender and blend for a few seconds until the oats are broken up smaller and more “flour-like”.  Mix into patty mixture along with flaxseed and water mixture (which should have gelled up a bit).

Form patties according to the size of your buns and one by one, cook with a little bit of oil on medium/low heat for a few minutes on each side until browned slightly.

For my burgers I used Ezekiel’s Sesame Sprouted Buns.  On the bottom bun I put a light spread of Chipotle Veganaise then I layered on pea sprouts, the patty, a tomato slice, avocado slices and some sliced red onion rings.

Get creative and enjoy!

(and don’t forget a delicious side of watermelon!)

It’s that time of the week again: SMOOTHIE TUESDAYS!  Going to keep it simple this time and if you follow my page on facebook, this is the drink I mentioned late last week.  And so, to keep introductions brief. here we go! 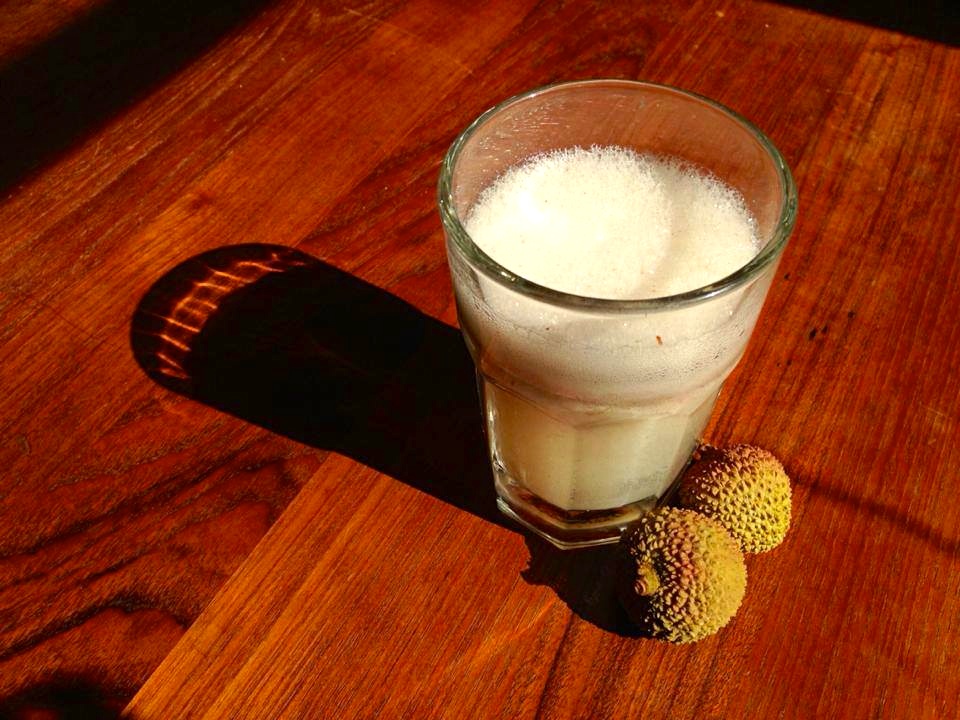 *I usually remove the skins and seeds overtop of the blender since oftentimes the lychee is so juicy that it drips all over the place and I don’t want to miss a single delicious drop!